A Final Look at I Never Saw Another Butterfly 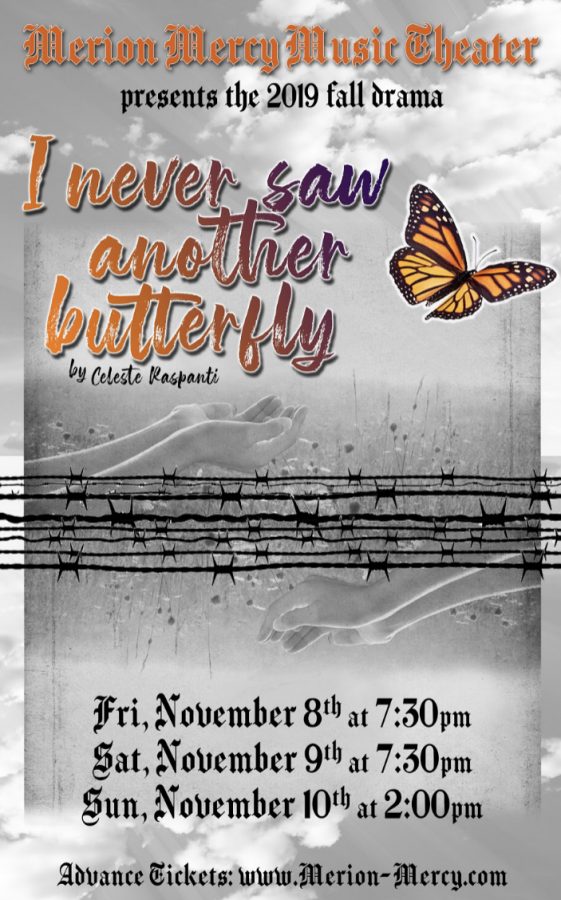 A story about resilience and hope: Merion Mercy Music Theater’s (MMMT) fall production, I Never Saw Another Butterfly, took place on Friday, November 8th and ran until Sunday, November 10th. Its three performances left the audience truly touched and moved. Being involved in this show was an incredible experience that taught me the importance of home, love, and family.

After the show closed, I interviewed my fellow cast members and got an inside look at playing their characters and performing in the drama. I also asked Mrs. Beth Criscuolo, the director, some questions about being involved with this production.

Grace Brazunas ‘20 played Raja Englanderova, the protagonist and narrator in I Never Saw Another Butterfly. In this beautifully haunting production, Raja is a young girl whose world is flipped upside down when she and her family are taken to a concentration camp in Terezin, where she, along with the other children, must learn the hardships and horrors of World War II.

“I think that the biggest challenge about taking on this role was trying to portray extreme loss and grief in an authentic way. From the moment we started the show, I knew that this would be a challenge for me and the rest of the cast. I could never come close to understanding the immensity of pain that was felt by the Jewish people during the Holocaust, and so I was worried about being able to portray even a tiny fraction of this pain. This is one of the reasons I thought it was so important that we did this play in 2019: it is crucial that we do not forget the horror of the Holocaust. We even see some similar events occurring in our modern world, and we must be fully aware of the sinister undertones of such events. As Dr. Rittner said at the common hour, we as Christians must stand with the Jewish people and other groups when such violence and bigotry occurs,” Grace so excellently put.

Joshua Atkinson ‘22 played Pavel Englanderova, Raja’s older brother in I Never Saw Another Butterfly. Pavel is a passionate, strong, hot-headed brother, who will go to whatever measures in order to protect his family.

Joshua says: “One thing that I admire about Pavel is that he isn’t afraid to fight for what he thinks is right. All he wanted to do was to rebel against the Nazis, even if it wasn’t the best idea. I feel that Pavel does things out of anger, and doesn’t think things through all the way. That’s one of the things I dislike about him. I think people who are very outgoing and persistent will love this character. I think they will like the fact that Pavel is a little bit of a trouble maker, but it’s only because he stands up for what he thinks is right.”

Lastly, Mrs. Criscuolo (Mrs. Cris), the director of I Never Saw Another Butterfly had some thoughtful words to share about creating this wonderful show.

“What I loved about directing I Never Saw Another Butterfly was the freedom I felt I had to be creative within the limits of the play itself. The playwright suggests that projections be used during the production to show the actual children’s artwork that is talked about in the story. What she doesn’t say is which drawings, paintings, and poems to use; I was able to decide that for myself. I loved that! As a matter of fact, I went a step further in adding recorded music from the 1930s/ 40s, sound effects, and acapella songs that the cast members sang. By adding a song at the end of each act of the play, I was able to highlight the beautiful voices of the students involved and set the mood I wanted at the same time. Because I was able to create my own version of the play based on the artwork I chose to display on stage and the live music I added, the rehearsal process was especially exciting for me. I was anxious to see how the audience would react to the decisions I made. Looking back on the experience I can say that I was very proud of the final product, a culmination of the artistic choices this particular group of students, my awesome production staff and I made over an 8 week period. What a wonderful opportunity we all had to incorporate some beautiful artwork and lovely music into the telling of the true, sad story of the Holocaust.”

Ultimately, the beauty, mystery, and sadness of this show left the audience stirred; there was much positive feedback from the audience members. It’s very likely that this breathtaking story of resilience and hope changed the way they looked at life and the way they saw the world.