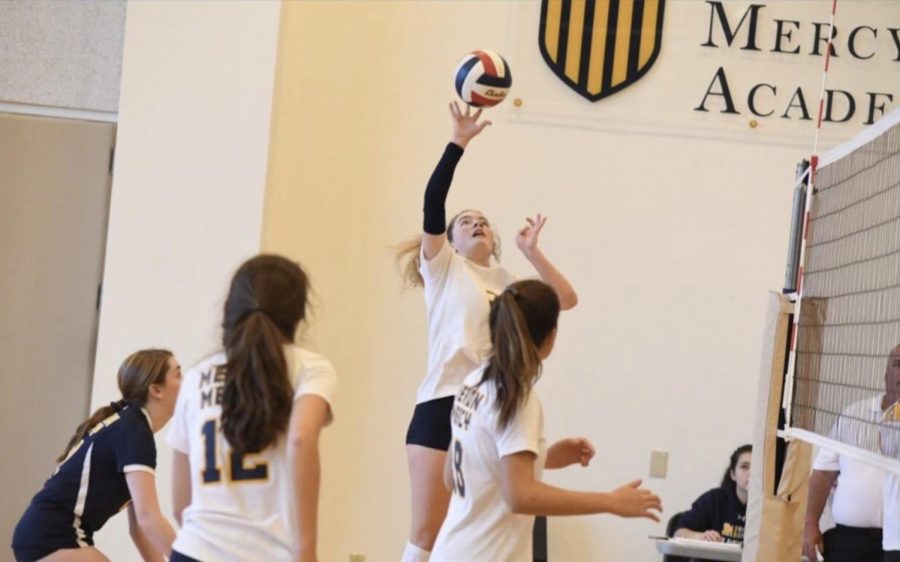 Merion Mercy’s fall sports seasons have gone relatively well according to members of the volleyball, soccer, crew, cross country, golf, tennis, and field hockey teams. Though certain teams have had greater success than others, all teams share the same mercy spirit of bonding and love.

Our varsity volleyball team won 2 out of 21 of their games. Both games they won were against Nazareth Academy. The JV volleyball team also won against Nazareth Academy; this was their only win. Annabelle Mirra has this to say about the team: “All girls on the team were very close and it made playing together more fun.” Several players stepped up to play new positions, and this young team looks forward to next season.

Merion Mercy’s Soccer varsity soccer team accumulated two wins out of twenty games, including  a Saturday game against Phil Mont Christian. “I was challenged playing against older opponents,” Kara Koley, a freshman on the varsity squad, said about her season. The Junior Varsity team won three games during their fall season. One win was against Nazareth Academy. “We didn’t win a lot of games, but it was fun.” Ella Donnelly, a junior varsity member, commented on her team’s season.

The Crew team had an amazing fall season, gaining several medals at regattas. Catherine Garvey speaks for the whole team when saying, “We’re excited for winter training and spring season.”

Merion’s Cross Country team won the varsity races against Villa Joseph Marie High School with a final score of 34-21 early in the season. Zoe Gusikoff spoke about her supportive team and how they did better than last year’s season: “The team was really encouraging throughout the season which motivated us to do better. We placed higher than last year because of our strong bond and the help of our coaches.”

The Merion Golf team won three out of 12 meets during their fall season. The games they won were against Nazareth Academy, Country Day School of the Sacred Heart, and Sacred Heart Academy. Mckenna Foody says this for her team,“We don’t bring the fire, we bring the rain.”

Out of 16 games, Merion’s Tennis team won six. Two of those winning games were against Saint Basil Academy. Country Day School of the Sacred Heart was the third win. Two more of those games were won against Nazareth Academy and the last was Sacred Heart.

The Field Hockey Varsity team won most of their games. The only losses on record were against GMA and Notre Dame Early in the season. In all, Merion’s varsity games mostly consisted of wins. The Junior Varsity field hockey teams had twenty games and won six of them. There were three ties in their season, and two of which were against Mount Saint Joseph Academy.