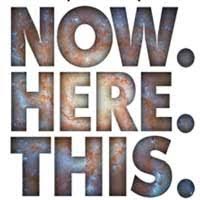 The MMMT cast and crew had an amazing fall virtual performance, showing their theater talents over zoom. It went live on Merion Mercy’s youtube channel on Friday, November 20th and could be viewed until November 26th.  The musical “Now. Here. This” is about living in the present moment, which is a valuable mindset to have through these unusual times. You may be wondering, “How was this show conducted virtually?” Cast member Christina Schwab 21’ shared her experiences filming the show in an interview. She describes both the advantages and disadvantages of filming over Zoom.

What were your emotions going into the show?

Christina Schwab: “My emotions varied a lot while putting on this production. It was really difficult not to be sad because the fall drama is always something that I look forward to and having my last one be completely different was really hard. However, this show also brought me an incredible amount of joy and laughter. Filming the show and watching the final performance made me feel really accomplished and happy.”

What were the differences between practicing the virtual play then acting live?

CS: “It’s much more difficult to act through zoom, but we learned that it’s definitely possible! Normally you have another person (or a set) to play off of, which not only helps with line memorizing but also with feeling and more importantly showing the emotions of your character. It was also challenging acting to a camera, normally when you’re one stage you are able to move and look around, whereas your range is much more limited through your phone/laptop camera. It’s all a great learning experience though, it helped me become much more comfortable acting to a camera and even in everyday online activities such as presenting something in class!”

How long did it take to practice and act out scenes over zoom?

CS: “It didn’t take as long to practice the scenes, but it definitely took longer to record them. One of the really cool things about live theatre is that, even though someone may mess up, the show keeps on going and the actors on stage don’t miss a beat. However, filming this production gave us a chance to do as many takes as possible. Although it took a while sometimes, it was definitely worth it because we came out with great scenes with little to no errors!”

How did the cast act in perfect timing over zoom?

CS: “A lot of the time actors will pause between lines or, if the scene is emotional and fast-paced, will cut each other off. Luckily we didn’t have any scene like that, so all we had to do was really shorten the pauses in between lines. As long as we started our lines directly after the person before us finishes theirs, the take would come out really well! There would end up being a normal length pause in between because of the lag which always happens over Zoom.